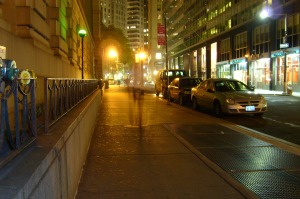 The piece of paper was a perfect white rectangle on the desk in front of me, an empty shape too intimidating to breach. I tried to think, to collapse myself into thought the way I so often do, communicate the credence of my ideas through swift and elegant pen strokes, angry letters and words, sentences and jutting symbols of association. Maybe it was the shape of the blank white sheet obstructing me, its precision so taut and unforgiving, deconstructing the creative process into pure barren silence. Or maybe it was her, the woman to whom the ideas were directed, my love for her so sightless and violent in nature that all rational language died prematurely in my mind prior to its exposure to the influence of the pen.

No, this is wrong, this is all wrong. This type of beginning is an instant showcase of hollowness. I never speak to her like this, nobody alive speaks like this. If it is practical sentiment I want to relate, defragment these complex thoughts into common meaning, I must find a practical vehicle with which to exchange them.

A negative proposition at the forefront sets a malignant tone for the entire letter. I must begin with an authoritative propositional phrase, an affirmation of love. I must lean on the theme of our love, our history together, and push the apology aside until later in the letter, when nothing but an apology would make sense in its reinforcement of the aforementioned.

I tried to stop thinking and went to the kitchen to pour myself a glass of wine, and then another, a formal release of mental strain, drinking down the crystalline purity of deflation. Then I went back to the study and wrote the letter, discarding the burdens of message and meaning alike, diving headlong into the chasm of blank whiteness, my thoughts stretched outward in time and place until the entire letter was suddenly finished an hour later, lines and curves painted on the page exactly as I wanted them, truth without restraint, love in collusion with purpose. Then I sealed the letter in a blank white envelope and dropped it in the garbage.

Who reads these letters, I wondered. There must be a thousand letters in this world written each day that just get thrown away, the messages sealed and signed, adoration and violence and meaninglessness perfumed upon the pages. Someone reads these letters, the evidence of our irresolution, our frail whims. The moment we dispose of our ideas and rear them to the heap, the moment we place the neat folded parchment in the trash and expel it from our conscience, someone on the other end is already waiting for it, a reader far more astute than we imagine, the sole cultivator of our discarded feelings and suspended emotions. By not delivering them to the intended recipients we feel as though we’ve rendered the meanings in the letters harmless, we’ve absolved ourselves of our reactionary blunders. But someone finds them and reads them and thrusts meaning back onto the messages. Maybe this person finds pleasure in what they read, as though each hypothetically failed correspondence is a valued discovery, an unexpected unearthing into another’s private life, a magnified examination into the social machine of our culture. The person who finds these letters and reads them keeps them for self-edification. The words on the page and the page in the envelope are raised up to semi-iconic status in their lives, brief but genuine illuminations into the world of private conversations to which they otherwise wouldn’t have been included. He or she who reads the letters finds it much more difficult to discard them than the person who wrote them. For the man or woman who finds the letters and digests their content, their subtle meanings painted in abstract and concrete idiom, these letters are the battery of their operative hopefulness. A line wrought from love and sentiment becomes their personal shining juxtaposition with disenchantment. The pain splayed across the page, the heart-shorn emotion from a love askew, the tender eulogy and the apologetic logic, these are the most vivid and tactile reflections for the reader. The letters were of course written by strangers with the intended audience as strangers and yet the reader feels as though he or she knows them both. The letters strip away the mystery and put a profile to the writers, they put a garbled and imaginary face to the name at the top of the page, the salutation at the bottom. The reader invents living people from the names because the written emotive force is too profound and real to keep them from identifying humanity with the language. These letters are at the vanguard of everything that makes humanity such a tremendous communicative current, they unite us in our solitude and mystery, these letters bind the likes of community and individual, they fully replace the very things the writer of the letters was trying to avoid, that subtle inward heartbreak of not being understood, that feeling that the words didn’t, and possibly couldn’t accurately navigate the complicated labyrinth of feelings within. For the lucky or reluctant reader, the letters are more descriptive and enlightening than the writer could have imagined. This is the only language either of them could ever possibly understand. Some will tell us to bury our pain, others will instruct us to express it. But this is really the only way to learn, the proper way to heal from our emotive wounds. If only we were instructed to recreate our pain in language, construct our meditative ailments out of idea and paper in letter form and then ceremoniously place our arrangements in the garbage rather than the mailbox, this world would be a world of deep committed understanding and empathy. It would be a world where the letter was exalted above all else save the human condition.

Back in the kitchen I finished the bottle of wine and shattered it on the linoleum floor. After careful consideration, I decided not to remove my clothes and roll around on the wreckage.

One thought on “Labrynth”