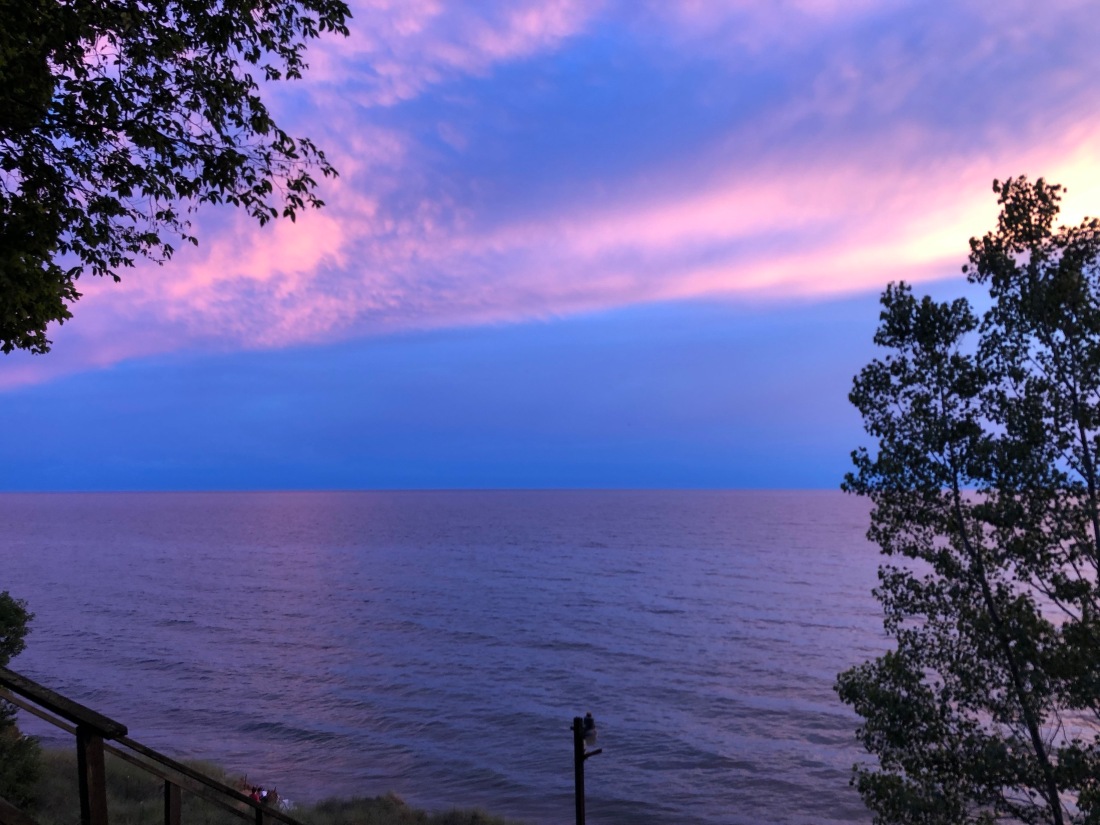 I hauled twenty-three loads this week, he said. I’m drinkin til I pass out.

We hefted oversized mugs of gold beer to our faces. The manager and bartender eyed us. A racist-sounding country singer drawled from the overhead speaker.

He said: Worst of em was Reno to Chicago. I rode a storm the whole way. Truck blowin this way and that.

His name was Nick and I met him at this shitty bar one hour and two mugs ago. Truckers are a lonely bunch. Nick came here to drink. I walked over from the stop because I was bored.

I said: I did twenty last week, so I feel you.

My wife’s asleep by now, he said, flipping his phone on the bar top.

We don’t ask after another trucker’s family, even if there’s something we want to know, even if we freely offer those details about ourselves. I looked at my watch.

Where you from? he asked.

We drank. I said: I’m from everywhere but right now I live in Vermont.

Vermont, he said, staring into the distance.

I noticed he was near done with his beer, so I gulped mine down. I motioned for the bartender to pour us another.

You got the last one, I said.

Let me ask you, he said. You ever do time?

I thought it an odd question. Because I’m black? I wondered.

I made no expression, no movement.

I drank and nodded. This beer would be my last. Darkness at the windows kept me from seeing night in Spokane. It was almost closing on a Tuesday night. Only a few other losers wasted their time in the place. Most of them worked there.

I fuckin did time, he said, humorless. Then he distracted himself with the monitors above the bar and drank down half the mug. A minute passed and he turned his head toward me, his eyes shiny and unfocused.

He said: We should get a hooker and tag team her.

I smiled. I thought he was joking, but he was serious. He lowered his voice to a whisper.

I can get us something young, he said, drunk, looking over his shoulder, then mine. I know a guy here in Spokane.

His eyes reached for mine and landed. The skin on my back rippled to my shoulders, riding a wave to my scalp. Again I made no expression. I nodded solemnly and drank.

Young as you want, he whispered, looking back to the TVs above the bar.

I must have misunderstood him. What we talked about after that is blurry, indiscernible. I don’t know how I got back to my rig. Most of the trucks were gone when I woke at dawn.

I saw him again ten months later in Colorado Springs. I’d thought about him every day, wondering if I’d imagined the episode. I saw him refueling at a hauler station and reintroduced myself.

Oh yeah, he said, eyeing me suspiciously before shaking my hand. Snow and cold swarmed us.

Yeah I remember you, he said.

You need a coffee? I asked, motioning toward the cafe next door.

Once seated at the table we layered down and thawed and danced around small talk before he leaned in and whispered to me, his breath smoke and coffee, cold sores, rotten teeth.

Last time we talked, he said.

He squirmed in his chair.

In Spokane. I mention anything to you about —?

I looked at him and sipped the coffee.

He said: I don’t know how to put this.

We told each other we’d both done time, I said. That’s what I remember.

Yeah, he said, relief refracting about the asymmetry of his eyes.

He leaned back in his seat.

I said: We said to keep in touch and I never gave you my card.

I plucked a business card from the back of my iPhone and handed it to him. He handed me his card and I put it in my pocket without looking at it.

If you’re ever in Vermont, I said, shaking his hand outside the cafe.

I pulled his card from my pocket once back in the cabin of my truck.

Weeks passed and I couldn’t forget him. His odor. I trained both body and technique with him in mind.

Negotiations with crew mates and surreptitious questions to office personnel yielded nothing to Kentucky. When I finally landed a shift to Louisville, the load was light as the spring rain and I drove as long and hard as law allowed. I arrived at dusk and took a cab to three blocks away from the address on Nick’s card. It was hot and humid on foot, but breezy.

I knocked on the building door, unsure of my purpose. It was a trucker warehouse with no lights on. I waited. Footsteps, then the door cracked open. His eyes: squinty and hard and uneven.

Nick, I said, my voice as non-threatening as possible. My body language was bad.

We don’t want none, he said, and closed the door.

You gave me your card, I said to the door. Vermont. Remember?

I waited and the door cracked open again. A fly wandered in.

He sent a hard, suspicious look.

Sorry, he said. Round here don’t get a lot of.

It’s cool, I said. Just stopped in to say hey. I was in Louisville and remembered your card.

He nodded once, eyeing me.

Sure, I said, walking into the darkness after him.

Crazy you got me today, he said. I got in last night and I’m leavin in the morning.

The shop was empty of people and machines except one truck, likely his.

I said: I didn’t think anyone would be here.

He opened the refrigerator. Budweiser cans. I took one.

Just me, he said.

I don’t remember our conversation over the next several minutes as I drank the Budweiser. I was too far into my head. The can was empty and fragile in my hand.

Hey, I said, and paused.

I lied to you back in Colorado.

In Colorado, I said. I wasn’t honest with you.

What happened in Colorado? he said.

I remembered our conversation from Spokane, I said.

What’you talkin about, man? he said.

Then I hit him. All the attempts in my mind, all the square shots and the misses, the temple grazes, all the scenarios I’d played and replayed over the past eighteen months were nothing compared to the pulpy sensation of his nose and left cheekbone meeting the fist at the end of my right arm, bent slightly at the elbow as I leaned in lighting quick from the waist, a solid strike in any storm, any war, under any circumstances, just or unjust.

He staggered. He could take a punch. Adrenaline rocketed through his body and mind but mine was already in orbit. I pounced atop him with the other fist, then both. My physical shape and training made quick work. I knew what he was going to say when I arrived at the door, about not getting a lot of black folk around there. I thought about pissing on him but hit him once more instead. He lay there like the little girls he — I thought. Then I left.