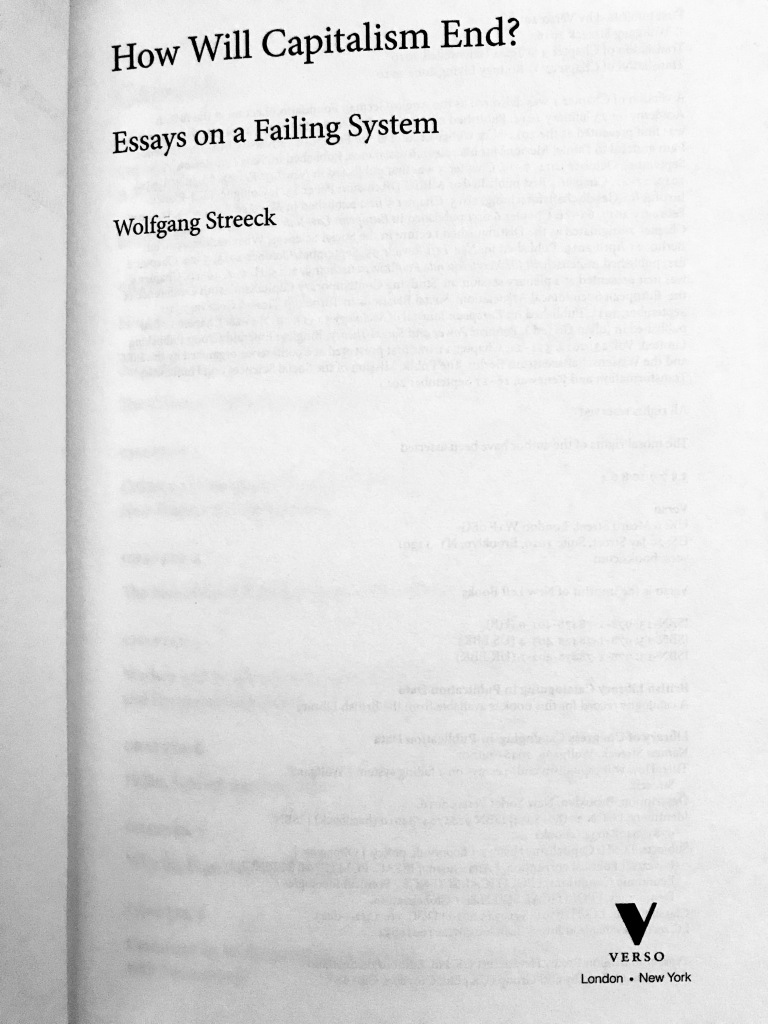 “Capitalism has always been an improbable social formation, full of conflicts and contradictions, therefore permanently unstable and in flux, and highly conditional on historically contingent and precarious supportive as well as constraining events and institutions.”[1]

“The tensions and contradictions within the capitalist political-economic configuration make for an ever-present possibility of structural breakdown and social crisis.”[2]

“In fact, the history of modern capitalism can be written as a succession of crises that capitalism survived only at the price of deep transformations of its economic and social institutions, saving it from bankruptcy in unforeseeable and often unintended ways…The fact that capitalism has until now managed to outlive all predictions of its impending death need not mean that it will forever be able to do so; […] we cannot rule out the possibility that, next time, whatever cavalry capitalism may require for its security may fail to show up.”[3]

“Why should capitalism, whatever its deficiencies, be in crisis at all if it no longer has any opposition worthy of the name? When Communism imploded in 1989, this was widely viewed as capitalism’s final triumph.”[4]

“My answer is that having no opposition may be more of a liability for capitalism than an asset. Social systems thrive on internal heterogeneity, on a pluralism of organizing principles protecting them from dedicating themselves entirely to a single purpose, crowding out other goals that must also be attended to if the system is to be sustainable.”[5]

“Capitalism without opposition is left to its own devices, which do not include self-restraint…We are already in a position to observe capitalism passing away as a result of having destroyed its opposition—dying, as it were, from an overdose of itself.”[6]

On oligarchic redistribution and the outcome of the economic crisis of 2008: “The possibility as provided by a global capital market of rescuing yourself and your family by exiting together with your possessions offers the strongest possible temptation for the rich to move into endgame mode—cash in, burn bridges, and leave nothing behind but scorched earth.”[7]

“German philosopher Max Weber (1864-1920) drew a sharp line between capitalism and greed, pointing to what he believed were its origins in the religious tradition of Protestantism. According to Weber, greed had existed everywhere, and at all times; not only was it NOT distinctive of capitalism, it was even apt to subvert it. Capitalism was based NOT on a desire to get rich on self-discipline, methodical effort, responsible stewardship, sober devotion to a calling, and to a rational organization of life…Weber’s ethical vindication of capitalism now seems to apply to an altogether different world. Finance is an “industry’ where innovation is hard to distinguish from rule-bending or rule-breaking; where the payoffs from semi-legal and illegal activities are particularly high; where the gradient in expertise and pay between firms and regulatory authorities is extreme; where the revolving doors between the two offer unending possibilities for subtle and not-so-subtle corruption.”[8]

“The Weberian attempt to prevent it from being confounded with greed has finally failed, as it has more than ever become synonymous with corruption.”[9]

“The capitalist system is at present stricken with at least five worsening disorders for which no cure is at hand: declining growth, oligarchy, starvation of the public sphere, corruption, and international anarchy. What is to be expected, based on capitalism’s recent historical record, is a long and painful period of cumulative decay, intensifying frictions, fragility and uncertainty, and a steady succession of ‘normal accidents’ quite possibly on the scale of the global breakdown of the 1930s.”[10]