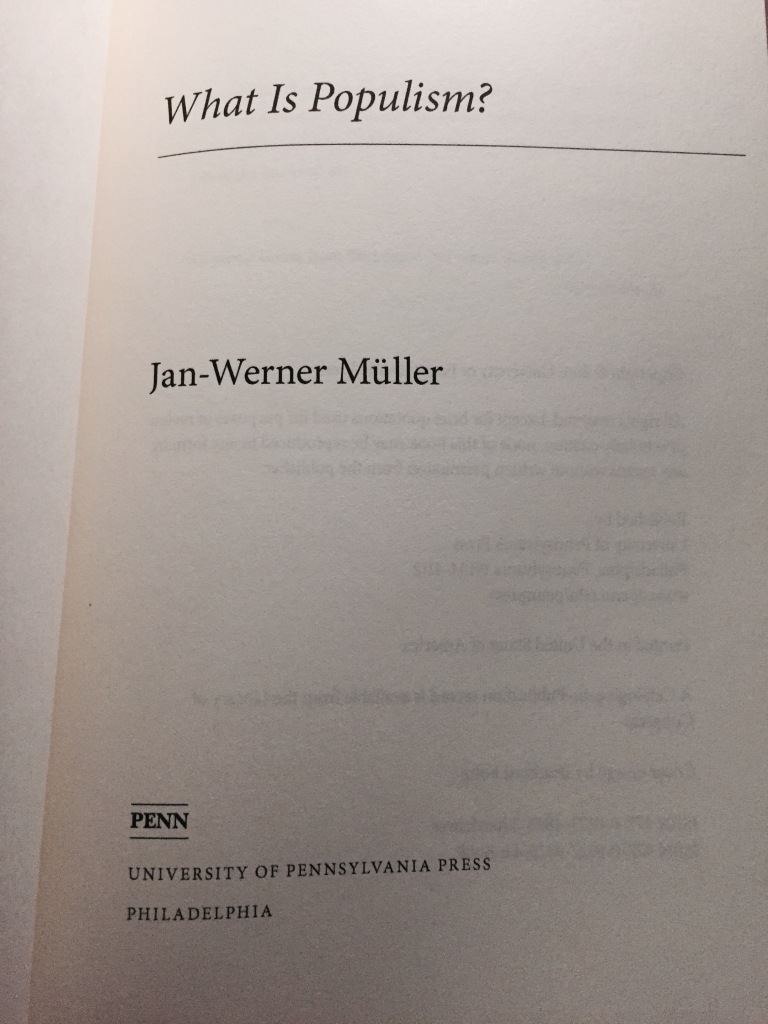 From Müller, Jan-Werner. What is Populism? University of Pennsylvania Press, Philadelphia, 2016.

Populism arises with the introduction of liberal democracy; it is its shadow.[1]

Populism is a particular moralistic imagination of politics, a way of perceiving the political world that sets a morally pure and fully unified—but ultimately fictional—narrative of people against elites who are deemed corrupt or in some other way morally inferior. In addition to being anti-elitist, populists are always anti-pluralist: populists claim that they and only they represent the people. There can be no populism without someone speaking in the name of the people as a whole.[2]

A core claim of populism is that only some of the people are really the people.[3]

Principled, moralized anti-pluralism and the reliance on a non-institutionalized notion of “the people” also helps explain why populists so frequently oppose the “morally correct” outcome of a vote to the actual empirical results of an election, especially when the latter was not in their favor. […] Convention itself is rigged. In short, the problem is never the populist’s imperfect capacity to represent the people’s will; rather, it’s always the institutions that somehow produce the wrong outcomes. Even if the institutions look properly democratic, there must be something happening behind the scenes that allows corrupt elites to continue to betray the people. Conspiracy theories are thus not a curious addition to populist rhetoric; they are rooted in and emerge from the very logic of populism itself.[4]

Populists always want to cut out the middle man and rely as little as possible on complex party organizations as intermediaries between citizens and politicians. The same is true for wanting to be done with journalists: the media is routinely accused by populists of “mediating,” which is exactly what they are supposed to do, but which is seen by populists as somehow distorting political reality.[5]

While populist parties do indeed protest against elites, this does not mean that populism in government is contradictory. Many populist victors continue to behave like victims … polarizing and preparing the people for nothing less than what is conjured up as a kind of apocalyptic confrontation. They seek to moralize political conflict as much as possible. There is never a dearth of enemies, and these are always nothing less than enemies of the people as a whole.[6]

It is with the rise of the Tea Party and Donald Trump’s rise in 2015-2016 that populism has become of major importance in American politics. Clearly, anger has played a role, but anger by itself is not much of an explanation of anything. The reasons for that anger have something to do with a sense that the country is changing culturally in ways deeply objectionable to a certain percentage of American citizens. There is the increasing influence of social-sexual liberal values in which white Protestants (the “real people”) have less and less purchase on social reality.[7]

Populists should be criticized for what they are—a real danger to democracy. But that does not mean one should not engage them in political debate. Talking with populists is not the same as talking like populists. One can take the problems they raise seriously without accepting the ways in which they frame these problems.[8]

One thought on “Notes from Jan-Werner Müller”