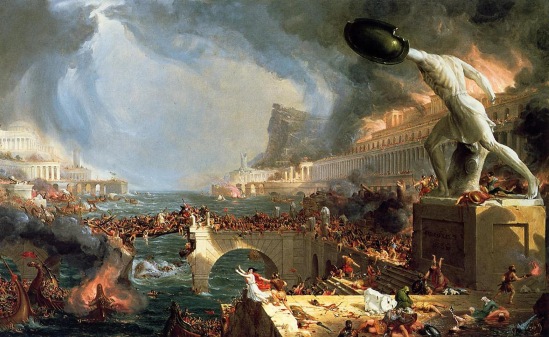 I imagine I’m a slave in ancient Rome during the early reign of Octavian. I’m approaching middle age but in fine shape, and my meager education allows me to work as an accountant for a quite reasonable and beneficent consul. I do not know any other life or situation, for I was born into servility and have demonstrated strength and aptitude in my duties. The respect I display and the ethic with which I perform my work has awarded me a sense of freedom and respect from my master and in my community. The Republic is in disarray with the separation of Antony to the Egyptians and the whore Cleopatra. The consuls and the local population all fear the worst, that a total breakdown of the Republic is inevitable. Octavian has begun recruiting a vast naval army and I volunteer, resigning my work as a clerk in hopes of being completely freed after military service. For months I train as the tension tightens and war becomes more of a certainty.

I have no wife, no children, and no family in a world that makes little sense to me. The machinations of man seem to govern all rules of the Earth, for we have truly become rulers of the land. There are no gods and the Republic is full of imbeciles who have nothing better to do than believe in mystic flattery. We are the true gods; the world is a hostile place where men encourage this hostility through politics and war and the perpetuation of enslavement. If I die in Agrippa’s war at least I’ll finally be absolved of this systematic separation of those with privilege and those without. The world is a cruel and barbaric place and the Republic is an ornate façade. I have studied Cicero and believe that a man stripped of the ability to govern his own fate is a gross injustice. So I will fight for my own freedom and nothing more; I shall not grieve if the Republic perishes.

Most other slaves have it far worse than I. They toil and bleed and are murdered for no other reason than for the powerful to assert its control. I observe in silence, grateful for my luck, but am aware that it is luck and only luck that separates the diseased slave from me, only luck that separates the servile from the privileged. Is not man in his status as god the most cruel and unjust?