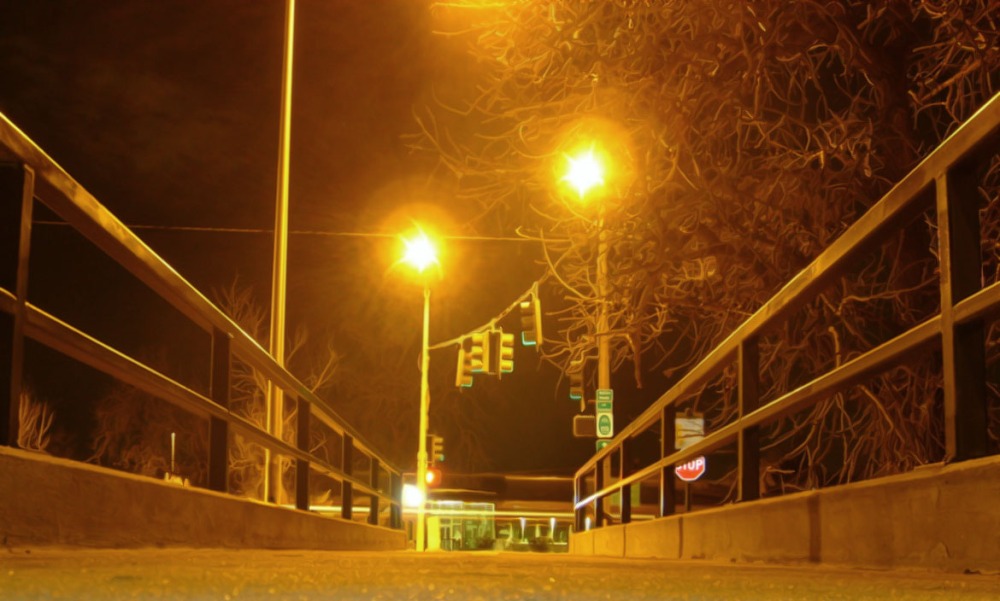 The country road wound about the pale and gave way to asphalt lined with thick trees dark green and oddly comforting in their claustrophobic evocations. The detective reached to the dash for his brand new pack of smokes, the first he’d bought in ten years. He lit one up. It was like he never quit. He’d never even changed. He was still on patrol years ago wearing blue and knocking on the apartment door of some couple fighting and keeping the neighbors awake. He was still unsure of himself in the subtle anomie, that warm comforting taste in his throat like a glance in the mirror in half-light. He wasn’t driving his police issue Chevy but instead his old Toyota sedan, not north but south, away from his youth and everything he’d ever known, toward a future at the academy, more confidence, with the world and nothing but years ahead of him. He was still out scouting the streets for chicks from his high school, not looking for a fight but not shying away from one, feeling that same comforting sadness in those long crepuscular summer nights. He was still riding his old Mongoose bike, still too big for it, down through the bridge underpasses, looking for answers in the shadows but scared of what he’d probably find. He was still the same, playing baseball in the summer heat, those intolerable humid afternoons, standing in the outfield and making up excuses for why he was the way he was: alone, strong, too smart for his own good. He was still making excuses for why no one ever liked him or why he never liked anyone else and he was still trying to talk to that girl what’s-her-name, not wondering where he would be in fifteen years and the answer he wasn’t looking for was right here, driving through a sudden rainstorm about a hundred miles south of New York, trying to remember what he was doing fifteen years ago.

His brain was a machine, trained, and his body was a vessel, muscle and bone and varied tissues broken down into molecules like simple arithmetic. He was the sum of his parts and his experiences, patient and calculating but also deeply confused about his identity. He wanted to know what it was about himself that had eluded him all these years: the uncertainty, the erratic behavior, his disdain for routine and inactivity—all the things that he believed had made him a good police officer but also markedly incapable in social situations. Was it you, mom? Did I get that from you? For as long as he could remember, he knew he’d never settle into an established order of domestic life, he would never be satisfied with a woman, with a family, with a home, with a house in the suburbs, with himself, with anything, and he considered this to be a redeeming quality, a virtue, if one is indeed tasked with the preposterous notion of growing spiritually, expanding one’s self by building character and sustaining it while the rest of the lot packed it in, sold it off. He no longer had any goals because he’d already achieved everything he set out to do. What’s left? he thought. I don’t have any goals, he said aloud, laughing, and the rain began to pound the car in a torrent of water so that the wipers couldn’t keep up. I’m too fucking young to die, he said, and pulled the Chevy onto the shoulder.

His thoughts returned to Norma Jean, or instead to the young man involved with the case, perhaps the only real suspect, though he wasn’t actually a suspect at all. The detective remembered sitting in this same car outside the young man’s apartment in a rainstorm just like this one, and the young man was very sincere and yet suspicious, though certainly not guilty of anything criminal. The detective remembered there being something intangibly wrong about the whole case, about the way the sergeant so hastily declared Norma Jean’s death a suicide, cut-and-dry, he had said, without following up with the young man and even discouraging any interaction with him. And it was odd how the young man seemed so oddly connected to Norma Jean, how he’d claimed to have visions about Norma Jean and her killer. The detective had always felt the girl was pushed from the summit of Gorgola Hill and she hadn’t fallen accidentally nor had she jumped of her own volition. But the detective was just a normal man, a cop with no influence in the world, and his crazy intuitions were probably wrong. But even if they weren’t he certainly couldn’t do anything about it.

The rain slacked just enough for him to start the sedan again and steer slowly north toward a faceless reflection in the soggy landscape. He saw the image of his father in everything. He cried silently the rest of the way to the airport.

For the entire chapter, purchase a copy of the novel when it’s published.