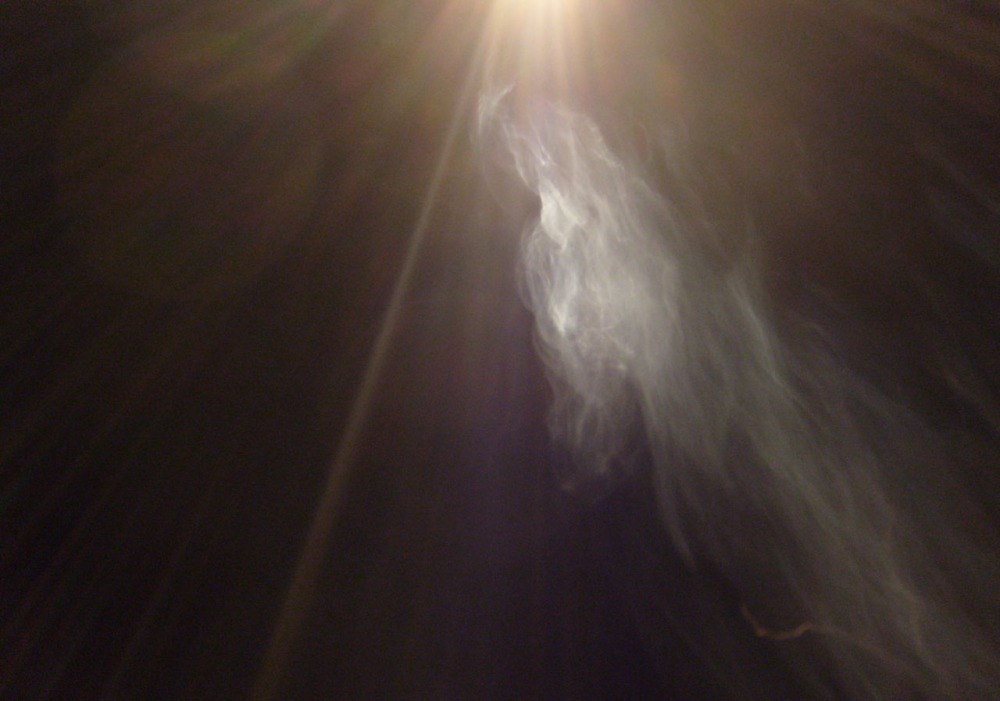 Sometimes I recall those memories of my father and me in his garage and view them cinematically. Jutting images of deep emotional warmth, close-up frames of his pallid head, his face folding in wrinkled gaiety. The stories we shared were the background music of our film. Quaint abstract close-up of my fingers holding a cigarette, smoke rising in creeping braids, the lens focusing past the smoke to my father’s face, his head bent forward in meditation, listening. In the garage we were safe. The world had its troubles, its violence and fakery, its small-mindedness. Our world was in the garage beneath the bright fluorescent glow, it was the two of us learning, reaching into parts of ourselves and pulling out the truths, extending them out for the other to take and digest. The garage was retreat, lectern, prayer room. I view those deep moments in montage, powerful imagery flashing about the screen of my mind, the moments before the credits roll up from the disconnected abyss.

Then in the garage one Saturday afternoon he collapsed to the ground and couldn’t move. His legs wouldn’t support him. He was conscious but his brain wasn’t communicating with his limbs. The overhead door was opened wide to the sunshine. I’ll never forget his face, that expression of shock, understanding, submission, helpless analysis. My father knew in that instant that he had been beaten by his own mortality. It had stepped in front of him and choked him down. How sudden and jarring death claims our attention. How strange to be alive and commanding one moment, a sycophant the next. He saw the rest of his life spread out thinly before him, the decay, the mindlessness, the vibrato and stink of his organs shutting down. He realized in that flashing madness that he wouldn’t live another month.

I helped him to his feet while my stepmother called the hospital. He was still stunned in silent thought. I could see the fear and awe on his face. He knew he was looking straight into the heart of that wide visceral truth. He thought he had envisioned it, he told himself repeatedly that he was ready. As I set him in his folding chair and lit him a cigarette, he realized he hadn’t even known what ready meant.

Just before my stepmother drove the two of them out of the garage and down the driveway to my father’s sun-soaked reckoning, I took off my necklace and placed it in his hand. He was almost too weak to hang on to it. I said I would meet them at the hospital and watched them drive away, the car shrinking away from me into the luminous maw, my hand where my chain had been and that naked, vulnerable feeling there.

One thought on “A memory in algorithm”