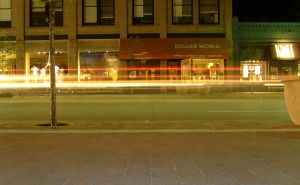 And so they walked into the library, towering cathedral of light. Devotees in tandem surrounded on all sides by mankind’s greatest gifts to the universe. Dyed cloth and leather-bound truths stacked in neat proportion, titles and subtitles stamped and translated upon the spines of those immortal wardens of knowledge. The books filled the shelves and climbed to a rectangle skylight high above.

“There was a time when our lives connected, you and me,” he said. “A symbol, a thread. Symbol of a thread. Two people mirroring each other, hundreds of miles apart. Shadowed beings in complicit multi-dimensional transit.”

“My actions as demands upon your actions. You, urging me onward, my movements and decisions like subconscious pullings from another realm. A voice in the night. It was like having a twin, a shared consciousness, our destinies converging at a precise gridline somewhere in the margins.”

“I never felt that,” she said.

They walked slowly past the As, their eyes darting upward into the soft light, registering those sacred forgotten names, a recollection of something intimate experienced long ago, some message renewed, a respect paid in rapid fire as another name crossed their periphery. Achebe, Allende, Andrzejewski, Augustine.

“One and two, two and one,” he said. “One and the same. The same. An error in code, the single miscalculation of the universe. Me reincarnated as you but living in the same fluid scale of time, sharing the era. Past and future in mystical collision. Two autonomous minds subjected to the frailty of oneness.”

“What does that even mean?”

“But then love confronted us, showed us who we were. It was like a mirror set before our eyes, yours and mine, in our different places. Love convinced us we were two separate souls pointing in opposite directions. It broke our bond, broke us down, built us into distinct forces. Love is the reason we are alone.”

The simple curve of the C, with serifs and without. Camus, Cervantes, Chekhov. The slender shape of primitive weaponry mutated and frozen into meaning by the men and women who have wielded the letters most deftly. Coetzee, Conrad, Cummings. To learn about a place and a people, they must be experienced directly, firsthand. Our next best option is to absorb their literature.

“Disclosure has stricken us with solitude. We no longer share the same course of thought, driven into our shared plane of existence. I’m only half alive because the other part of me died when I met you. Before, you guided me. Now you aren’t even there. The voice is gone. I hear only my own voice,” he said.

They walked past the Es, the Fs. They didn’t see each other, half-listening, vision stretched to the limits of stimulation. The books contain, among other things, concentrated thought, the stories of generations and caste struggle, individuality at its strongest, its most raw and vulnerable. The beauty of the mundane, the horror and magnitude of the sublime. Comedy and tragedy, Faulkner, France, Frost. The most important minds of their culture, the disdained, the persecuted, the exalted, the romanticized and peculiarly burdened.

“What was his destination?”

“It was me. He was walking to me. He still is. He’s somewhere on this planet, walking. And when he finally gets to me I’ll see his face, eyes dark and replete with revelation, calm assurance from pale nomadic death, and I’ll know that I was always right to trust my veins.”

“We are a species that fears death more than anything,” he said. “We have created astounding myths to subvert death, to appease our fear. Death has no legs. It has no concept of time. When we die there is no big reveal, no fabricated deus ex machina. It cannot fool us. Death is a positive experience, it strips away all the negatives. It is the truest of truths, because, can you possibly think of anything more real?”

Their voices bounced off the stacks around them and returned mostly the same but aged, withered at the edges, wiser and hardened. Their voices carried facsimiles of the stamped names on the shelves, Joyce, Kobayashi, Lawrence, the titles unfurling as they strolled, symbolic and fragmented histories, Ulysses, Tabishui, The Rainbow, horizontal and vertical, a tapestry of letters and colors emblazoned everlasting. Language as pure force. The skylight darkened high above, restless clouds stalking about. The library fell into shadow.

“All these books,” she said, breaking the spell, uttering the heretofore unmentioned, slightly desecrating, or at least, de-mystifying the moment. “The names, the stories. Many of these books were written at such heavy consequence. People died for these words, these billion, trillion words.”

“No,” he said. “They died for the ideas the words represent. These are history’s truest martyrs. Timeless spiritual reminders of ourselves in retrospect. We have a duty to them to uphold our own reflections, our own struggles, and relate them to progeny. We must do this not only in honor of their sacrifice but also to satisfy our own artistic impetus. Nothing is more valuable to a culture than its art. Art is the fight of the people, the revolving paradigm, the mirror of culture, idealizing human life in its confrontation with the divine.”

They walked the entire perimeter and then turned to face the center of the room. Drowned in silent awe, an ardor for mankind and its potential, proud sentiments for the simplest of objects in concealment of the most complex ideas. In this way, literature is like humanity itself. They felt the books looking directly back at them.

“We are still connected, you and me,” she said. “But instead of a shared drive, we strive to forge our own paths. This is the way it is supposed to be, the way it was always supposed to be. A human being is an inherently independent creature. The other people of his culture may serve a particular purpose, but a man or a woman must fundamentally feed his or her own will. This is the most basic necessity. All these books, this room full of books. It’s like a vault enshrining the battle cry of the individual.”

“Love is the reason we are alone,” he said again, and they turned to leave.